A visit from a 91-year-old former grain location manager

By: Special to Landus Cooperative from Chuck Offenburger (with additional reporting from Alicia Heun)

In the 1920s, at the age of 10, Alma (Fuller) Shorey Young rode her horse from her family’s farm in Farnhamville to the neighbor’s place to ask for the job of “water boy” on the threshing crew. Even at a young age, Alma didn’t let gender…or anything else, for that matter…get in her way.

For about 25 years, from the 1950s into the 1970s, Alma was general manager for four grain elevators in Greene Co. including the elevator Landus Cooperative recently donated to the Greene Co. Fair Board (see left). In the 1950s, she was recognized as the only woman in America running a grain elevator.

Roger Fray, chief commodity marketing officer at Landus Cooperative, talked about the evolution of the grain business with Alma Shorey Young during a reception Saturday morning for her in Jefferson. Fray noted that while it was unusual for Young to be running grain elevators back during her career, today women are rising to key management and executive positions across the grain marketing business. He shared a copy of the cooperative’s most recent issue of “Grow” magazine with her.

When the discussion turned to recent bean yields, Fray noted that farmers had been talking about potentially low bean yields pre-harvest but have been pleasantly surprised with how well they’re doing. Sharp as a tack in her 90’s, Young added, ‘Oh, they always say that’! Fray later noted that despite time and technology, some things in ag never change!

After visiting her old location, Young was taken into the “control room” of the Landus Cooperative facility in Jefferson, where grain superintendent Matt McAfee was waiting to meet her. “I’ve been reading all about you,” McAfee said to Young, “and let me say it’s an honor to meet you.” McAfee and his control room sidekick Mike Larson gave Young a look at how all the computer-driven automation that Landus Cooperative uses in operating its grain elevators today.

Young noted that at her locations in the 50s and 60s one man ran each bin, scale house and conveyor system. With Jefferson’s 75 bins, that would be 75 people. Today, the site runs (off-harvest) with 4-5 full-time people.

When asked what advice she had for the grain manager today, she said “Stay in it. You have the best job there is. You boys stay right where you are in these jobs. You know what you’re doing with these computers, and all those farmers out there need you!” In the picture to the right, Matt McAfee, the grain superintendent at the Landus Cooperative facility in Jefferson, shows Alma Shorey Young how a fully-automated, computer-driven grain elevator works today. Young, who ran grain elevators in the 1950s, ’60s and ’70s, was beyond amazed.

You can read more about Alma at http://bit.ly/2xNxU3P. 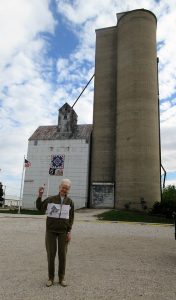 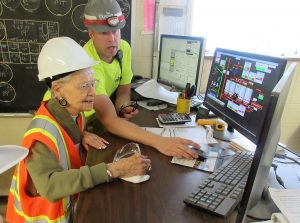 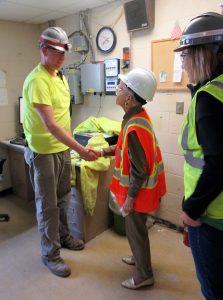 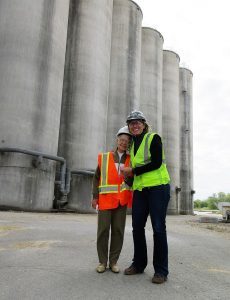 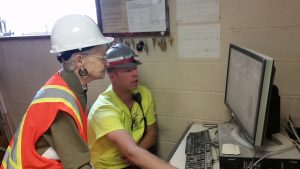 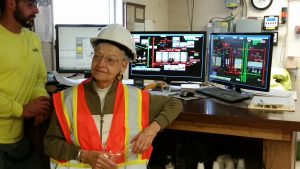 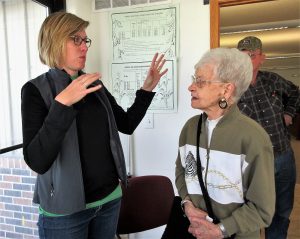