Soybeans down 4 to 5 cents

Yesterday, the May corn contract closed 3 ¾ cents lower, settling at $3.54 ¾, and the December contract was 3 ¾ cents lower closing at $3.82 ½. Funds are believed to be sitting at a record short on corn contracts of around 332K, but with good weather this week and trade expecting 20% of the corn planted by Sunday, it is tough to be a bull. Planting Progress Report was out yesterday with 6% of the corn crop planted, ahead of last year, but lagging behind the 5-year average.

The May soybean contract closed 3 ½ cents lower settling at $8.77, and the November contract was 3 ¾ cents lower closing at $9.09 ¾, yesterday. Beans continued their downward trend with the soybean export inspections reaching a new marketing year low, the lack of fresh trade news, and South American harvest progressing nicely. The Planting Progress Report out yesterday did show that only 1% of the bean crop has been planted, behind the 2% average, and the southern states are significantly lagging. In the end, the lack of bullish news is pressuring the corn and soy markets.

Charts compliment of the Kevin Van Trump of The Van Trump Report: 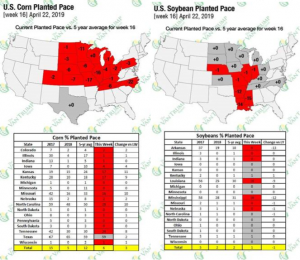 Landus Donates $49,500 to Local Fire and Rescue Crews Across Iowa